We created a holistic concept which complements stores not only with its design, but also with its added value as a hair salon. A unique dog grooming salon was thus created in the store.

The dog grooming salon design concept was created in connection with the design of SUPER ZOO stores, and creates a unique concept which imitates the current fashion trend of men’s barbershops, so that pets can feel good too.

The dog grooming salon concept is designed to evoke a similar “barbershop“ atmosphere, whether we’re talking about two-legged or four-legged pets, and the entire design follows on smoothly from the store design, using the same materials and similar elements.

The customers, in this case dogs, feel comfortable and safe while they’re waiting, because they’re in enclosures with toys. The grooming salon has its own waiting zone, which is separate from the grooming section, and most importantly from the sales section. While the dog is being groomed, the owner can drink a coffee in peace or go shopping. Accessories such as dog shampoos, treatments etc. are displayed for direct sale on the salon’s walls. Before and after photos, illustrating how dogs are transformed by grooming, hang on the salon’s walls, creating a very pleasant and humorous atmosphere.

Because the dog grooming salon is incorporated into the store, emphasis is placed on the SUPER ZOO brand’s visual identity.

The ergonomics and selected materials create a pleasant, cosy atmosphere which will unleash fantasy and creativity. 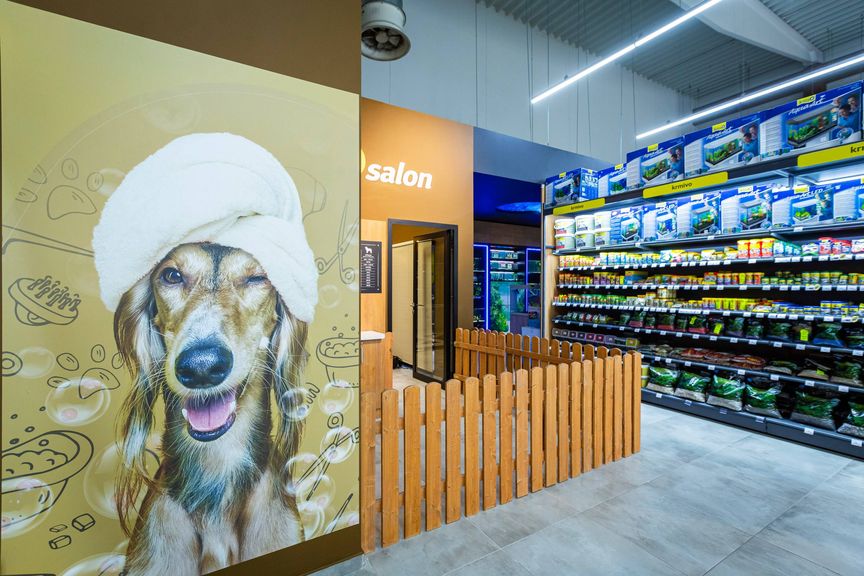