It was on 7 May 1997 exactly that Radomír Klofáč decided to set up a company. With a minimum of experience, but with maximum ambition and verve he set about getting into business. That same day, he found his first premises, an old plotter and a graphic designer and began focusing on producing advertisements. Since that time, the business has transformed. The company has become a leading expert in in-store design, has grown by almost 150 employees, won a number of awards for its concepts, and its services are utilised by the largest global retail brands.

“At the time I founded the company, the post-revolution euphoria was still tangible, and enthusiasm was the only motivation. Nobody had time for the future, and few of us focused on it. At that time, you decided to do something and then immediately starting going about it,” recalls company founder, Radomír Klofáč, of its beginnings.

He was so focused on his enthusiasm and the meteoric start that he had no time to even think about the future. In a nutshell, he set his goal and went for it. “At that time, I made the decision and went for it. When you start from scratch, you’ve got so many things to deal with, the future is so far away, that you can’t even focus on it.” His enthusiasm soon led to a growing number of contracts.

The company began designing display stands, which there was great demand for amongst retailers. That meant securing increased production. A production plant was erected, triggering the company’s expansion. But there were still obstacles to come for Radomír on the path to his dream. One difficult moment came with the economic crisis of 2008 – 2009. “We didn’t do anything wrong at that time, but suddenly our phones stopped ringing and business came to a stop around the world. The only thing remaining was costs and wages,” says Radomír of the beginnings of the crisis. But Radomír took a different tack to other companies. He held on to all his staff and began investing in training them and in new technologies. The entire company thus progressively refocused on in-store design, and did so to a professional level which was unprecedented in the Czech Republic. “Everyone tried to talk me out of it; the bank was threatening me, and sensible people were shaking their heads. Our rivals dismissed most of their employees in order to cut costs and remain in profit. But eventually the crisis came to an end. Companies began to breathe again and they sought out suppliers that were ready.” Thus the economic crisis became a turning point for the company. At a moment when rivals had been decimated, MORIS design was available with the means, the know-how and the trained staff.

From that time, the company began to expand, and progressively became a respected expert in in-store design, enjoying a number of successes. These include acquiring a crucial contract for more than 800 Teta drugstore branches. But its successes weren’t just in contracts. MORIS design has already received over 70 awards from professional competitions. One such major success was last year’s victory in the prestigious POPAI AWARDS Paris competition, where the company became the only one in history to win three awards, gold, silver and bronze. However, the company founder sees its greatest success somewhere entirely different: “The company’s greatest success and gift is the fact that I have begun transferring the company to my sons, who are continuing with the same commitment I once had, so that we are keeping the company a family one.”

Building a company up from scratch requires a lot of time and effort. As Radomír says himself, that oft-mooted work-life balance was a dirty word to begin with. Twenty-five years ago, new companies were being set up every day, and they all wanted to be successful. Those who wanted to do well and overtake their rivals had to spend the most time at work, and they had to set up their own balance between work and family life. “Nobody cared that you had a family or kids at home. Spending all day at work meant you were the daddy. For many years, I didn’t spend the time I should have with my kids and my wife, but I’m consoled by the fact that today we’ve got a great company which is supporting us and another 150 or so families.” To the question of whether he would set about the MORIS project again, even knowing what it was going to involve, founder Radomír Klofáč responds without hesitation: “Definitely, 110 %!”

Today, as he is gradually handing over company management to his sons, Radomír is enjoying more leisure time, allowing him to focus properly on his hobbies. “Since childhood, right up to “granddadhood”, I’ve loved adventure. That’s why I’m often in the countryside, most commonly in the forest. I love the wildness of nature, and I find humility in it. I enjoy travelling the world, and most of all I love yachting on the sea. I take part in various expeditions, and that really satisfies me.” His love for yachts has manifested itself within MORIS design, which since 2013 has organised the May Regatta – a competition on the sea in Croatia.

This year, MORIS design is celebrating 25 years since it was founded. Over that time, it has acquired many awards, new employees and experience in the Czech Republic and abroad. It can boast of successful projects for the largest companies, such as Sportisimo, O2, Super Zoo, Tesco and CK Fischer. And what will MORIS design look like 25 years from now, according to its founder?

“It’ll be a strong and fabulous family company operating internationally. It’ll supply perfect products which are in great demand, which serve people well and make them happy. People will work in the company because they want to work in our company, and there’ll be waiting lists to get in. The company will be highly ethical, with an ideal management system and it won’t hurt the environment. Perhaps this seems unrealistic? Yet 25 years ago, it seemed unrealistic to imagine we would one day have a company of 150 people over 6 677 m2 of space, recipients of over 70 international awards, able to implement a number of stores each day, working in a number of EU countries, and number one in our field.”

And his birthday wish for MORIS design? “Getting better every day, buddy!” 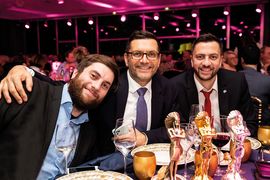 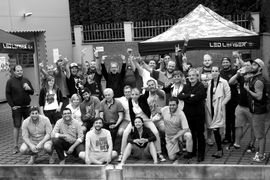 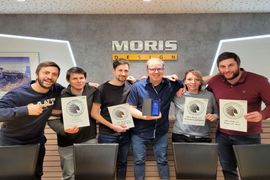