A project unique in its scope

We can all remember those legendary O2 telephone boxes, which used to be used extensively to make calls from sites all around the Czech Republic. They were also places where people sheltered from the rain, and passed the time by making calls. In today’s electronic age, the vast majority of people now make calls using mobile phones, and so the telephone box’s glory days are over. Dismantling more than 3500 separate telephone booths over two years – that was all the time we had. But how can you deal with such a massive number of telephone boxes, and how can you quickly dismantle them at sites which are each entirely different? You have to be ready for absolutely anything in order to cope with such a large project. No two booths are the same, and the most difficult aspect here is returning the surface to its original state, the way it was 10 years ago, and you haven’t got complete documents about it because they are 99% outdated. The booth can be on the wall of a building, on top of Sněžka mountain, in an underpass, in a wood, in a pedestrian zone or in the Prague Metro. And when you think you’re truly prepared for anything, the next day sees a new challenge in a different village, or right on Wenceslas Square. Our team deserve massive thanks for being able to deal with everything,” says Adam Klofáč, joint owner of MORIS design, which acquired the project to dismantle the telephone booths. For this job, we demolished over 3000 cubic metres of concrete bases and sewed grass over an area of over 2000 m2. We know these telephone booths very well, because we starting applying the O2 branding to them 17 years ago. For us, this previous job had been a big challenge, and one we carried through 107%. We didn’t just supply stickers, but also complete light boxes and other atypical features.

Challenging preparation
It is clear from a cursory look that many questions had to be answered during preparation in order that everything could go smoothly, fully co-ordinated and to the agreed deadline.

Some telephone boxes are right on the street, some are in metro underpasses, or in shopping centres, and they have various bases upon which they are built. There are telephone boxes standing on paving stones, asphalt or, e.g., ordinary grass. The dismantling of a booth requires about 5 professions to be present on site, including an electrician, locksmith, paver, and others. Furthermore, every booth is different. There are three basic types – separate booths, semi-booths and boxes.

A service which saves time and money
Our advantage was that our MORIS construction division has many years’ experience of facility management. This involves service, administration and maintenance of the stores of various companies who have multiple branches and do not have the capacity or time to deal with servicing and rectifying faults at their branches and who do not want to hire specialists for particular professions. We secure servicing for the branch network of companies such as TETA drogerie, O2, SUPER ZOO and Traficon and a further approx. 1000 sales outlets. Thus, our team was able to offer its extensive experience with various projects. In us, O2 acquired a strong partner for the eco-friendly disposal of booths.

A system which works the entire time
On the basis of an analysis and its assessment, we obtained data on the right way to begin such a project so that all procedures, and deadlines in particular, can be kept to. We created an exact timetable including a list of different locations across the entire Czech Republic, including complete services for each site where a telephone box was located.

A little adrenalin on the ground
And what does a service like this look like on the ground? It’s a huge adrenalin rush, because every site is completely different. To summarise, the actual state is assessed on site, and individual work begins, including the most important jobs, specifically specialist disconnection from the electricity grid and subsequent inspection, cutting out the telephone box, demolishing the concrete base, removal of rubble and telephone box, and subsequent sorting and eco-friendly disposal of material. This is followed by the phase of cleaning and restoring the places where the telephone boxes had been standing, such as by applying tiles or asphalt, or sewing grass,” says Adam Klofáč.

The home stretch
The result was superb, as we managed to dispose of all telephone boxes across the entire Czech Republic in an eco-friendly manner in just two years, keeping to the agreed deadline. This was the overarching goal which we met to the very last booth. We’re glad to have been a part of the long history of coin- and card-operated telephone boxes,” concludes Adam Klofáč of MORIS design. 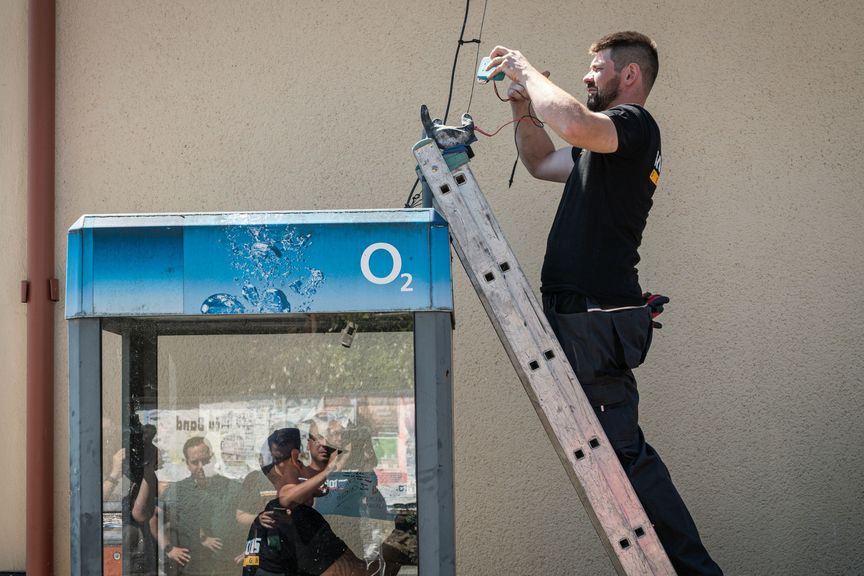 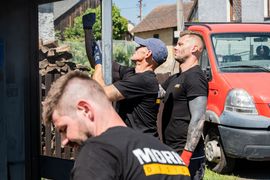 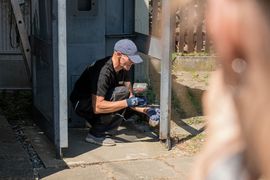 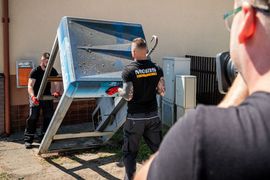